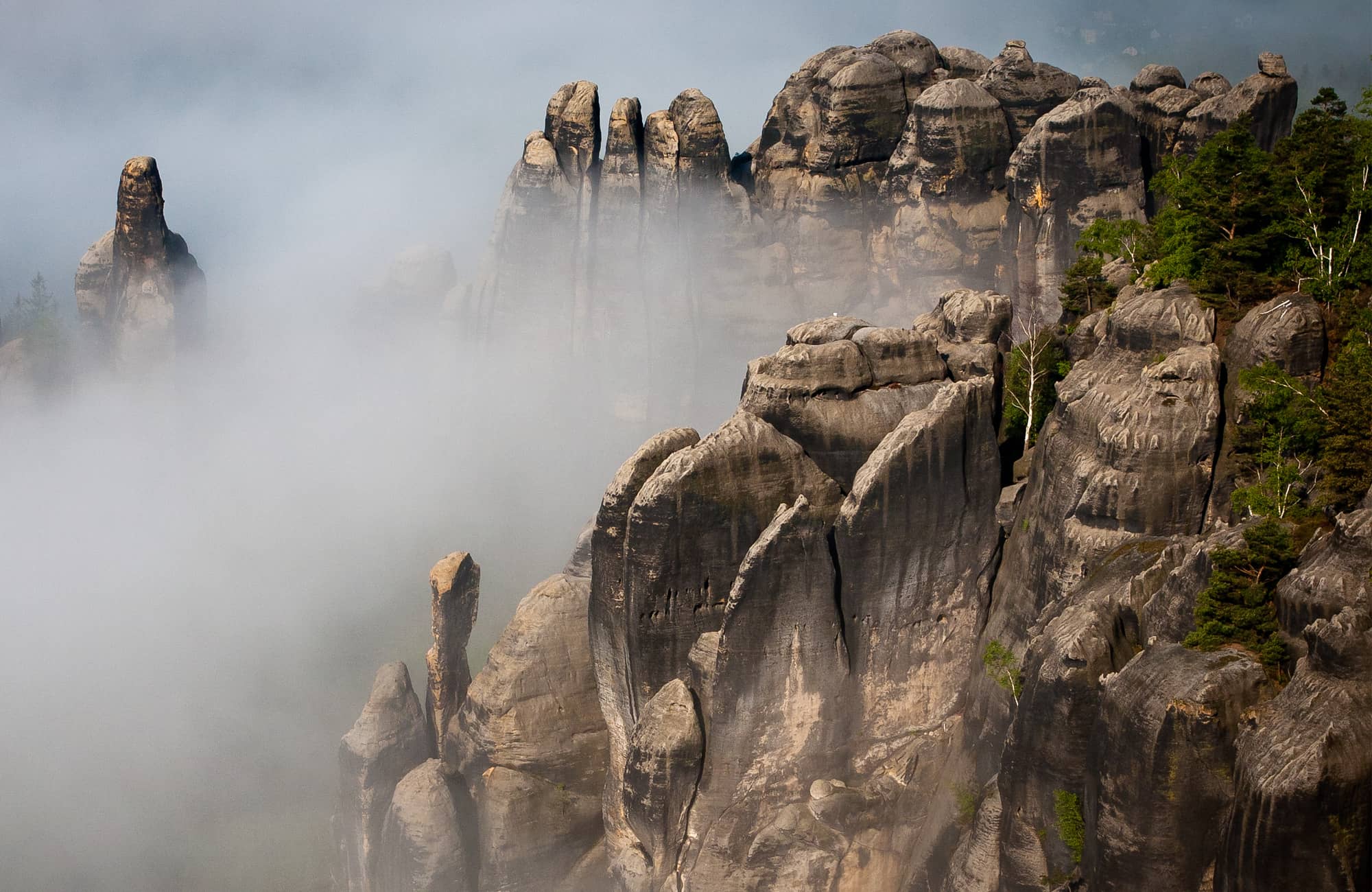 Cookie preferences
This website uses cookies, which are necessary for the technical operation of the website and are always set. Other cookies, which increase the comfort when using this website, are used for direct advertising or to facilitate interaction with other websites and social networks, are only set with your consent.
Configuration
Technically required
These cookies are necessary for the basic functions of the shop.
"Allow all cookies" cookie
"Decline all cookies" cookie
CSRF token
Cookie preferences
Currency change
Customer-specific caching
Individual prices
PayPal payments
Selected shop
Session
Comfort functions
These cookies are used to make the shopping experience even more appealing, for example for the recognition of the visitor.
Note
Statistics & Tracking
Affiliate program
Track device being used
Categories
Community

Balance is essential for our lives. Our earth moves in a determined orbit around the sun and the moon rotates around the earth. Ocean streams and storms move over our planet. The seasons change as the earth travelling around the sun. Whether mountains or valleys, deserts or oceans, everything is perfectly interrelated, and we as human beings are part of it.

Many things are normal for us that we did not give them any awareness. Mankind is developing new ways of life, which seem to depart from the natural life. Therefore it is becoming more important to reestablish a dialogue between our body, our mind and the nature again.

The idea of balancing is firmly anchored in different cultures. Even in the ancient Greece and Rome this art was known. At that time, different kinds of balancing acts on thin ropes existed already, including elegant dance movements and satiric routines.

There are also records from the Middle Ages. Acrobats performing on ropes were the center of attention on festivals and shows. In the 19th Century great rope artists such as Blondin and Farini were world famous. Various tricks were performed on a high wire, which spanned the Niagara Falls. In many Central Asian areas rope balancing also has a rich cultural tradition. In Korea, the Jultagi, a form of story-telling by rope acrobats, has been included in the protected cultural heritage. 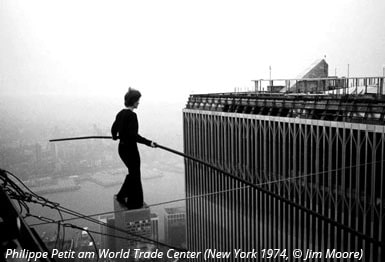 In the early hours of the 7th August 1974 Philippe Petit set-up a tightrope between the Twin Towers of the World Trade Center in New York and amazed a crowd of people by levitating for an hour above the awakening city.

The police arrested him because of this unauthorized action, and as punishment he had to give a performance for children in Central Park.

All these examples feature the fascination of the unusual and the skillful. A balancing act on a rope appears to overstep the limits of what seems humanly possible. Through great determination, dedication and courage a dream can become reality. 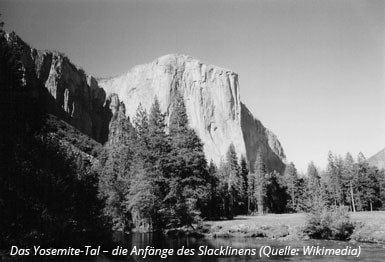 These rope acrobats were a source of inspiration to the pioneers of slacklining. But the story starts on another place.

In the early 80´s a handful of young climbers attended at the campgrounds in the Yosemite Valley and began balancing on chains, ropes and railings. For some of them a new passion was born.

Adam Grosowsky and Jeff Ellington were the first who appreciate the wonderful qualities of tubular nylon band for balancing purposes. In contrast to the usual balancing on steel or hemp rope the nylon band offers significantly more elasticity, is more lightweight, and has better walking properties. The dynamic webbing opened a new universe of balance forms. You can get drunken on this never ending wave while playing the game of gravity. Jeff and Adam pushed each other to new forms of movement on the line and inspire other slackliners. 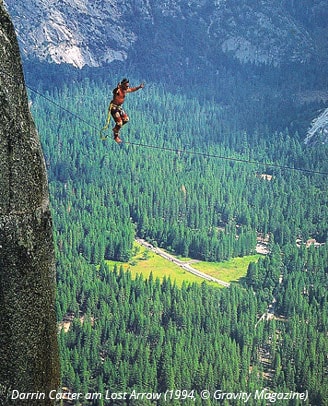 Adam and Jeff also recognized the challenge of the vertical and started a try in 1983 to achieve the Lost Arrow Spire on a wire, in vain. Their idea took the young Scott Balcom, and after an attempt in 1984 he could celebrate the first walk of the Lost Arrow Spire Highline in 1985. The slackline, first used as playing and training tool for shaping the balance and coordination transformed into its second meaning - the break-up of psychological barriers and gaining a new sense of freedom.

Darrin Carter, inspired by the first attempts of Scott on Lost Arrow, perfected in the early 90s the sport of high lining. He balanced several times without a leash to the Lost Arrow and could commit other highlines in this ultimate style. The basis for this new dimension were countless hours on "normal" Slacklines.

Darrin again charmed the next generation of slackliners. The slackline was established with Dean Potter, Shawn Snyder and Braden Mayfield in the American Freeclimbing Scene and earned a strong resonance in the media.

At the beginning of the new millennium, more and more Slacklines were seen in European climes, and since the 1. European Slackline Festival 2006 in Scharnitz, Austria, initiated by Heinz Zak, the slack webbing experiences a real boom in Germany. However, e.g. in France, the Czech Republic or Poland, more and more people get on the line. The slackline has now emancipated from climbing and enjoys among skateboarders, surfers and snowboarders / skiers as "dry run" increasing popularity and is now also used in physiotherapy and pedagogy.

Accompanying to the popularization is a greater diversity in the spectrum of slacklining. Artistic movement sequences are a key topic of the trickline. The length is the challenge for longlining. Balance over lakes and rivers is the aim in waterlining. The dangers of the highlining centralizes the relationship with internal fears. The city becomes a playground of the balance in urban space. 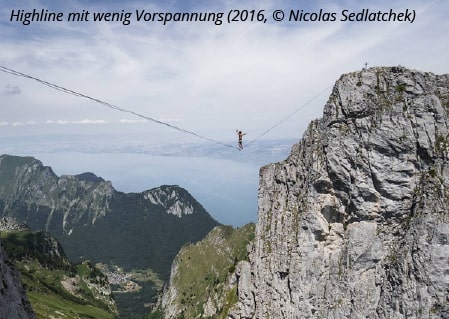 Particularly in Highlining, a committed and internationally connected community has emerged. Numerous annual festivals in different, beautiful places of the world, but especially in Europe, offer a platform for acquaintance, exchange and mutual inspiration. With this background, many new and great highlines as well as water and longlines have been realized.

Over the past few years, a dynamic has arisen in which length-related top marks have increased in an unpredictable speed and have sometimes even doubled. For example, the first Highline (and Slackline) of more than 1000 m by Danny Mensik and Nathan Paulin in 2016. The causes can be the growing size of the community and the positive reinforcement; on the other hand, there is a connection with a drastic change in the style in which the lines are rigged and walked. The key word here is little pretension and a lot of slack.

Another, natural development of the slackline movement is also to lead the future of the sport into a sustainable and responsible development. For that numerous local associations have established themselves around the world. As a consequence, the international Slackline Association ISA was founded in August 2015. 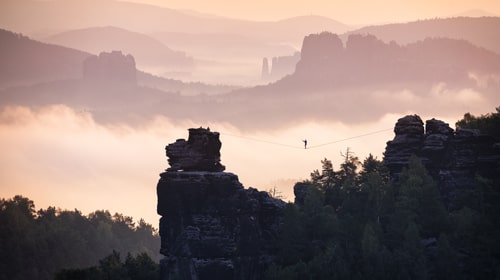 The fascination of slacklining is nourished by the movement in nature, active recreation, the delight in the ability to motoric learning or the meeting with like-minded people. Whether alone or with friends, you can experience amazing moments.

Balancing on a webbing gives us the opportunity to focus our awareness for a moment to the very basic harmony and native beauty.

We are all together in the process of writing a new chapter in the long history of the art of equilibrium.

This website uses cookies, which are necessary for the technical operation of the website and are always set. Other cookies, which increase the usability of this website, serve for direct advertising or simplify interaction with other websites and social networks, will only be used with your consent. More information
Decline Configure